Tomorrow Morning, Sunday August 9 at 10AM, I’ll be appearing on the internets. I’ll be joining David Newman on Hollow Earth Radio for his show “Under the Influence”. Dave’s show is described as following “the development of musical ideas across time, space, and genre.” We’ll be playing some tracks, including ones from my newly released Morning Glow album and having a morning chat. I am really looking forward to it; this will be my first invitation to appear on the radio for this release.

I invite you to join us and tune in!

Wow! Today is the day. On this lovely Tuesday “Morning Glow” is finally released. After all the toiling, false starts and take after re-take – I am pleased to finally offer my latest album for sale. It’s available through most of the major download retailers such as the iTunes store, Amazon.com and eMusic. If you want a hardcopy of the CD, you can also mail order it through IndiePool or mail order it through Amazon.ca.

Finally, if you want to get it brought into your local CD shop you should be able to special order it through HMV.

If you like it, don’t keep it to yourself! Indie DIY artists such as myself really rely on word-of-mouth to generate sales. Also, anybody feeling keen on it are encouraged to review it in online shops such as iTunes. Every little bit helps! 🙂

For those of you who missed it yesterday on my Twitter, one of my tracks was included in Tara Busch’s new weekly Free MP3 Monday. Tara Busch, for the uninitiated, does the Analog Suicide blog and is a fellow female Electronica artist. Her new album, Pilfershire Lane on Tummy Touch Records is hot off the presses and also comes in a fun limited edition box set. Recently she also did an official remix for Bat for Lashes‘ wonderful single “Daniel” and documented her process on youtube. (Pretty darn cool Tara!)

Head over to Tara’s site to grab your own copy of the Free MP3s from Monday, including my track “So Beautiful” which is the album opener to Morning Glow.

A while back, it was suggested to me that I market my new release as a debut release. This makes sense in a lot of ways. It’s been some time since my first album Adrift and now that I’ve changed my artist name, I could be starting afresh if I wanted to. The other major change is that I’ve started including more songwriting/structure in my work, so I really considered it.

I decided not to present it as my first solo release however… and here is some of my reasoning.

First of all, out of sincerity. To say that Morning Glow was a my first solo effort would be, well, not true. I did put out a prior album, and it was reasonably well received. While Adrift was different from Morning Glow, if you listen to both there is a clear progression from one to the other. They share a similar flavour. If you draw a line between two points, you get, well a line. The line points somewhere, hints at where you’re headed. It might be more impressive to say I started where I am now, but it isn’t true. I’ve come a long way. In this day and age of prepackaged starlets (who are also fab in their own way), sincerity is as good as any other asset.

Secondly, I don’t want to deny the struggle. It’s a waste not to learn from the struggle. I really feel proud of this new release, which is a really weird and unfamiliar sensation. It actually took me me an assload of work, faulty starts, and body fluids in the form of blood/sweat/tears. I don’t want to pretend that this just snuck out of nowhere. I had a vision of the album I wanted to create, but I didn’t have the skills, time, or knowledge for how to conquer that mountain. I bit off way more than I could chew, and then kept chewing. And chewing. After really sweating it out, I eventually made some good inroads. In the end, I had Morning Glow.

So while Morning Glow is a rebirth of sorts, it isn’t a true artist debut. But is the debut of my voice, my songwriting, and a new direction. So at least there’s that. 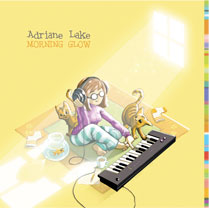 or
Order from Amazon